Powered by DJ's
Please use our Contact page here...

-This is an exciting and ground breaking release, says Andrew Van Almen, Atomix Productions General Manager. - Utilizing the power of the internet, Virtual DJ 6.0 greatly expands a DJ’s content selection by providing real time access, to freely available content, found anywhere on the internet. Atomix Productions has also creating the world’s first social network exclusively for DJ’s. This network gives DJ’s real time access to data, information, and suggestions, not only via the web, but also from directly within the program during live performances. The system can even make recommendations on what to play next, based on what millions of others DJ’s think, or, based on the data from the specific groups, that DJ is a member of, this is truly a game changer.

A few of the key features of this new innovative release are as follows; First, NetSearch. The idea is very simple: DJ’s no longer need to limit themselves to media found on their local hard drives. If they have an internet connection, every time they search for media, it will of course show the matching files on their hard drives, but now it will also start to crawl the Internet, and try to find videos or mp3s available on the net that match the query. Second, is the new MusicGroups. This allows Virtual DJ users to show the world what they play. It allows the DJ to get together with others who share his/her musical tastes, create individual groups, and upload playlists to be displayed in Virtual DJ’s community section. What makes this revolutionary is the fact that people can 'subscribe' to the MusicGroups of DJ’s, or groups they like. They will then receive personalized feeds directly inside Virtual DJ. The 'feeds' are completely personalized, and depends on what kind of music you've been playing, and will give you advice on what people from the MusicGroups you subscribed to, would play next. This release also has a completely new controller support system. Virtual DJ 6.0 took a change in philosophy about how it handles controllers. What difference does that bring for day to day operations? Well, first, anyone can now easily modify the behavior of any controllers, as easily as you could modify a keyboard shortcut before. You can even assign powerful scripted action for every button. Second, it's now much easier to add a new controller, MIDI, HID or whatever, without having to wait for a new release of Virtual DJ. Each new controllers will have a 'compatibility file' available from the download section before the controllers hit the market.

Preview Virtual DJ and get additional information at: www.virtualdj.com/ 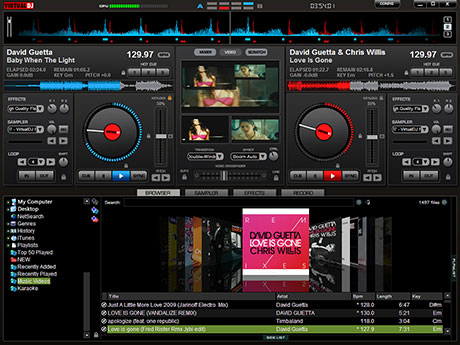 Welcome to VirtualDJ 6
This new version of VirtualDJ brings many new and exciting features. It greatly enhances the core values which made VirtualDJ so popular: accessibility, versatility and cutting-edge technology.

Because no two DJs are the same, we think that every DJ should have a custom-made, tailored software application. VirtualDJ 6 has been centered around a new language, called VDJscript, that really lets you take full control and full ownership of your software, and tweak it to your perfect liking in a matter of minutes.

With VirtualDJ 6, all the commands used in skins, keyboard shortcuts, controllers' mappings, etc, now use VDJscript.

VDJscript language has been designed to be both simple and complex, depending on how you will use it.

When used for your day to day needs, VDJscript is very simple, and look similar to the actions from VirtualDJ v5.x. You can write such commands as play, pause, crossfader 50%, etc.

But if you have more complex needs, VDJscript can turn into a full scripting language, complete with global variables, conditional branching, etc. You can write such commands as var $myvar ? pitch_range '10,16,50' : goto 400ms & loop 4 while_pressed

See the full documentation on VDJscript on the wiki page.

In VirtualDJ 6, we changed the approach we had on external controllers. In VirtualDJ v5.x, and in many competitors software, the software was designed around a mouse-and-keyboard use, and as the market released new USB DJ controllers, they were added one by one as emulation of the keyboard.

With Version 6, the controllers are now at the center of the software, and the keyboard is seen as just another kind of controller.

Any controller, be it HID or MIDI, can now be used with VirtualDJ, and every buttons, jog wheels, sliders, LEDs, LCD displays, etc, can be assigned to VDJscript macros to make your controller react exactly as you want it to.

By default, VirtualDJ comes preinstalled with an impressive list of over 40 different USB controllers, already fully mapped and ready to be used plug-and-play.

But if you have a controller that is not in the preinstalled list, you can easily create a "definition" file for it, using a simple XML syntax, for any HID or MIDI controller. Or, you can find on our website many user-submitted definition XMLs for almost every controller available on the market.

Because the technicality of the mix is only half of DJing, VirtualDJ 6 puts a strong focus on the other half: playing the right track at the right moment.

Two new features are there to bring you the tools to make the best musical selection. NetSearch is one of these new tools. Whenever you are looking for a song but don't have it, NetSearch will automatically crawl the Internet to try to find the song you're looking for. You can then instantly stream the song or video directly off the Internet. You will never again have to turn down a request because you don't have it, or be frustrated because you can't find a file.

If you don't have an Internet connection where you are DJing, do not worry. You can search all the tracks you need at home where you have a connection, and cache all the songs on your local or external hard drive, then play them offline from your club.

The songs browsed by NetSearch are files which are freely available on the Internet, as found on promotional websites and free catalogs. That includes several millions of songs, mainstream music as well as underground tracks or specific remixes. Atomix Productions is also working with selected content providers to keep NetSearch catalog as extensive as possible.

First, MusicGroups let you show to the world what music you play.

When you DJ with VirtualDJ, your playlist will automatically be sent, to your MusicGroup. Your friends and fans will be able to follow what you play, and vote for you or leave comments.

You can also get together with other DJs who have the same musical style as you, and try to create one of the best generic MusicGroup, and become a reference.

But the true power of MusicGroups lies in the feedbacks it will give you. While you are DJing with VirtualDJ, MusicGroups will constantly analyze what you are playing, and will make suggestions of what other DJs would have played next. The suggestion is based on what other DJs around the world play, with a stronger weight to the ones from the MusicGroups you subscribed to.

Unlike existing music matching solutions, MusicGroups suggestions are not based on automated music-likeness. MusicGroups gives you real advices, based on what millions of real DJs are playing every day in clubs.
You will find out that MusicGroups is a very good way to discover new tracks, and expend your sets.

For those of you who like the touch and feel of vinyls, you will love the new Timecode Engine of VirtualDJ 6. Rewritten from scratch, it brings a much better accuracy and responsiveness to timecodes.

The new Timecode Engine has been optimized with the traditional VirtualDJ v5 records, but can now also run in noisemap mode, and bring VirtualDJ's myriad of features while still using competitors' timecode solutions.

VirtualDJ 6 got rid of one of the annoying limitation of VirtualDJ v5: You can now resize your window on-the-fly, without worrying about which skin is in which resolution.

See the wiki for more information on Skins.

More and more video codecs are now being played by the internal video decoder.

The video engine has also been optimized and is now 15% faster than in version 5.

From USA to China, from France to Russia, all your files and songs written in foreign languages will now play and display flawlessly in VirtualDJ, both on PC and on Mac.

Version 6 also brings a long list of small improvements and bug fixes, thanks to the reports and help of hundreds of users who helped us to make it the most flawless software we ever released.

Copyright © 1998-2015 | PowerOnPlay.com | All Rights Reserved | Reproduction in whole or in part in any medium without written permission of Power On Play, Inc. is prohibited.