Powered by DJ's
Please use our Contact page here...

Are you tired of all these so called free MP3 players that are loaded with bloatware and crash? Then take a look at foobar2000. Is was designed by Peter Pawlowski (initially released on December 20, 2002). It's updated often and does an awesome job at playing back almost all file formats. I even use the Crossfader DSP to fade from 1 song into another.

I personally use foobar2000 with the ASIO plug-in to output audio to my low latency ASIO audio cards. Plus, you can customize it to look any way you want thanks to all the 3rd Party Support. This is my custom theme (make sure to unzip the file first) that you can import by going to File, Preferences, Display, Default User Interface. Under Theme management, click import theme.

You can also add BPM to the column. 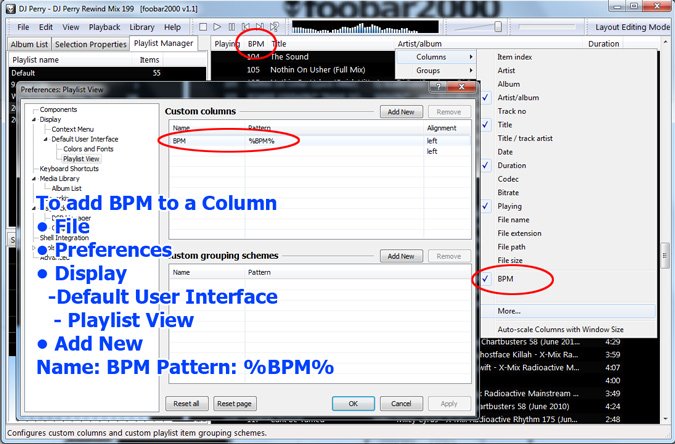 foobar2000 is a advanced freeware audio player for Windows developed by Peter Pawlowski, a former freelance contractor for Nullsoft. It is known for its highly modular design and extensive SDK which allows third-party developers to do such things as completely replace the interface. While supporting a large number of audio file formats, it has many features for metadata support, full unicode support, ReplayGain support and file organization, and it has a converter interface for use with command line encoders. To maximize the audio fidelity of consumer-grade equipment, it provides noise shaping and dithering. It features a number of official and third-party components which add many additional features. While the core is closed source, the SDK is licensed under the BSD license.

Since version 0.9.5, foobar2000 supports Windows XP and later releases only. This version features a revamped default interface, with embedded support for album list, album art, spectrum visualization, and some other features and improvements.

foobar2000 is an advanced freeware audio player for the Windows platform. Some of the basic features include full unicode support, ReplayGain support and native support for several popular audio formats.

Copyright © 1998-2015 | PowerOnPlay.com | All Rights Reserved | Reproduction in whole or in part in any medium without written permission of Power On Play, Inc. is prohibited.